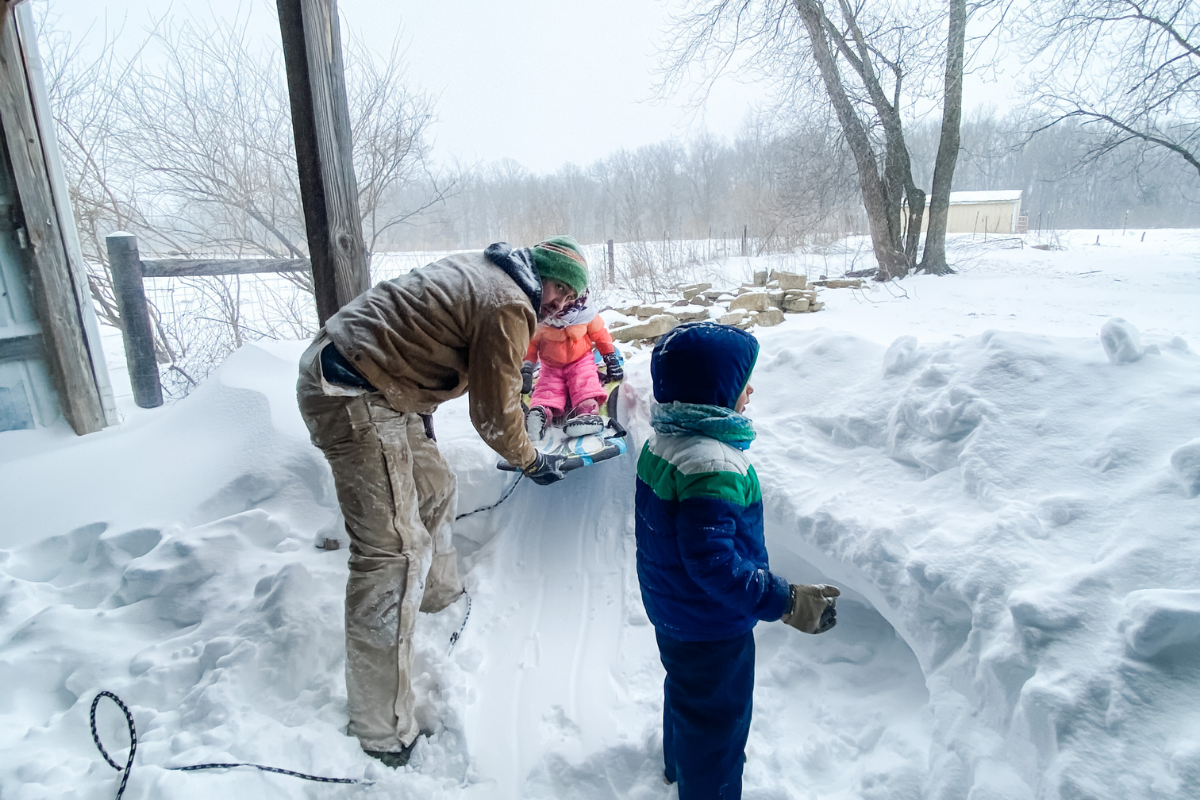 This post may contain affiliate links. As an Amazon Associate, I earn from qualifying purchases on Amazon.com.

In January 2021, we committed to completing the #1000HoursOutside Challenge. The premise is simple: spend 1000 hours outside in one year. It sounds great in theory, but February presented all sorts of challenges when the Arctic Blast settled over us for a few weeks.

February rolled in with average temperatures. We even eeked out a few really nice park days.

Park adventures have become a regular part of our schedule, COVID permitting. Exploring new parks helps us log hours and keep the kids (and myself!) excited to go outside. One of our favorite parks is the Boo Castle Park in Carbondale, IL. The Boo Castle Park has a Dungeons and Dragons theme with an entire castle to explore, Dragons and Hippogriffs to climb, and countless statues to admire. If you find yourself through the area, be sure you spend some time here!

As nicely as February came in, the middle of the month was a punch to the gut. An arctic blast settled over most of the continental United States. Out of the 28 days in February, 13 rang in below freezing in Southern Illinois. Many of those days were single digits temps with negative wind chills.

Our February goal was 1 hour outside every day. When I saw the frigid weather on the extended forecast, my anxiety kicked into high gear. After almost of whole year of pandemic restrictions, we were about to be trapped at home. Again.

It felt like the walls were closing in. Again.

I don’t know if things would have been different if we could have escaped to the library, a children’s museum, or an indoor playdate. But I knew the coming weeks would be really hard.

After a moment, I took a deep breath, closed my eyes, and repeated the mantra I clung so dogmatically to just a few short weeks before:

I clicked my heels together and opened one eye cautiously, peering at the weather app on my phone. No luck. My acceptance of the situation didn’t change anything.

I’m a huge believer in adjusting goals. If life situations change, it’s better to adjust the goal than get frustrated and give up. So I adjusted our goal. Rather than pushing to spend 1 hour outside, the goal was to go outside every day. It could be for 10 minutes or it could be for two hours. But if we set foot outside the house I would consider it a win.

Snow makes the outside more exciting

Along with the cold came several feet of snow. Which was awesome because we all LOVE snow!

We built snow forts, played on the sled, and practiced shapes.

When we weren’t playing in the snow, we did all of the typical snow day things: build blanket forts, bring in some snow to dye and make snow cones, and eat tomato soup.

We often get questions about how the animals are holding up in cold weather. I can say with confidence that the dog and the cows prefer the frigid temps over the heat of the summer. Our priorities are to provide shelter, food, and water. Otherwise, the herd can tolerate very cold temperatures. Even the littlest members of the herd.

But like everything, snow doesn’t stay exciting forever. So I guess I should amend my previous statement to “Snow makes the outside more exciting. Except when it doesn’t…”

“Snow makes the outside more exciting. Except when it doesn’t…”

“I don’t waaaaaant to go outside.”

My kids are probably a lot like your kids. Putting on socks, snow pants, snow boots, a heavy coat, a hat, and a scarf takes almost a decade with as many meltdowns. My 22-month-old couldn’t walk through the 3-foot snowdrifts. And the biting wind kept us confined to spending our time hiding behind buildings to catch a break.

Oh, and the kids were over it.

My son does this thing where he powers down when he’s tired. He sits down wherever he happens to be standing and tells me he’s out of battery. The only thing that can re-charge him is time or food.

We had many, many power downs in the Arctic Blast of 2021.

It’s all about perspective.

Eventually, the frigid temps resided and the snow melted into glorious muddy puddles.

We saw spring start to emerge and even got hints of early summer. Within one week of trudging through 3 and a half foot snowdrifts, we were baring our arms at the zoo in 70-degree temps.

Happily, we achieved our goal of going outside every day. Even when everyone was in a puddle of tears trying to put on snow pants (including me).

It was cold. The weather was incredibly harsh. We did our best to dress for the weather, but we don’t have extreme cold weather gear because it rarely gets and stays this cold for this long.

And it was HARD. I did my best to remain cheerful to model the “There’s no such thing as bad weather” mindset. But uuuuuggh. Forced cheerfulness is exhausting.

But most of the time I was glad we went out. Sometimes we only stayed out long enough to haul water to the animals. But sometimes we stayed out for over an hour and had fun. At the very least, we enjoyed the warmth of our house and couch cuddles even more when we came in.

The Arctic Blast was hard, but it also allowed for daily mini victories. And a reminder that doing hard things is necessary to really appreciate the good things.

Somehow, we exceed our one hour per day goal this February!

We finished February at 136% of our goal with 38 hours, 24 minutes, and 48 seconds spent outside. Because I love data, I compared February to January’s percent of goal metric. In January, we hit 106% of our goal. And January was FAR milder than February.

Even though a lot of February was hard, I think we all built our problem solving and resiliency muscles.

But to be totally clear – I’m glad we’re past it. We’re beyond ready for spring and summer!