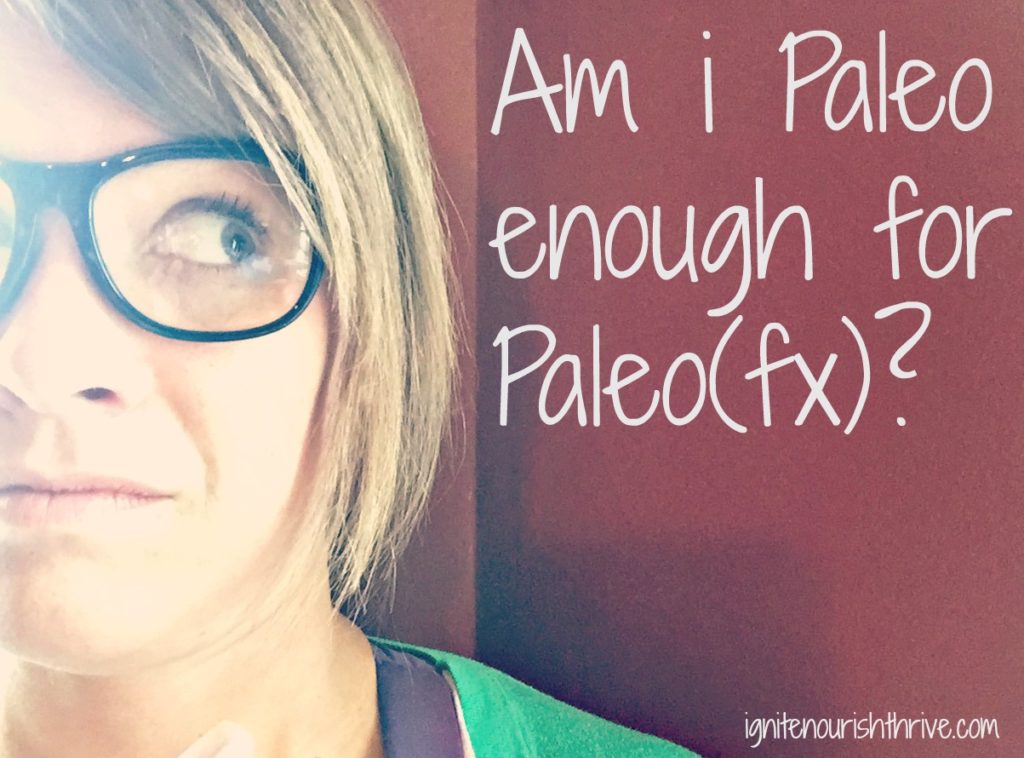 Next week, I’m off to Austin, Texas to attend Paleo(fx), a conference I believe to be one of the most forward thinking conferences in the world of nutrition, movement, and health.  (I do, however, recognize the irony of a “forward thinking” conference where people are trying to get back to the ways of cave-dwelling man.  But you know what I mean…)

I’m SUPER excited for this conference.  Like, pre-sharpen my pencils, charge my audio recorder, and organize my binder a week in advance EXCITED.  As you may know, I’ve lived a Paleo based lifestyle for the bulk of the last 5 years and I’ve credited it with reversing my multiple sclerosis.  While my Paleo life has certainly evolved over time (pun intended), the basics are there.

But as the conference has been fast approaching, a weird, sadly all too familiar feeling has been creeping up on me.  The type of feeling you may get when you have to squeeze into a bikini on the beach, go to a class reunion, or run your first 5k.

The feeling of not being enough.

I can attest that starting a business is about the worst thing you can do for your health… or maybe I’m just not disciplined enough yet.  Either way, I’m far less cave-womanly than I used to be:

As a result of all this, I’m carrying the largest percentage of body fat that I have in several years.  And I’m about to walk into a mecca full of health and fitness professionals.  To compound matters, I’m flying solo at the conference.  So I keep thinking the same thing over and over:

What if they judge me?

We’ve all thought this at various points in our lives.  Fears of inadequacy stack up until we’ve convinced ourselves that the entire world has cast a ballot that somehow matters.  Well meaning friends assure use that “no one is judging you, they don’t even notice you.”  But really…..  someone is probably judging us.

We all judge.  It’s human nature.  We judge speaking ability, parenting skills, life choices, intelligence levels, and of course, body composition.  And if you think you don’t judge, stop and check yourself next time you’re scrolling through your Facebook feed.

So I’ve convinced myself that I will make no friends because no one will want to hang out with the fat girl in the corner.

If I’m being realistic, there will be people that judge me and think I’m less valuable because I don’t look the Paleo part.  That’s cool, because I wouldn’t want those kids as my friends anyway.

What’s more likely is that I will meet people who will notice my less than optimal body composition, but not care either way.  They’ll probably spend more time wondering if my glasses are real or fake (fake, by the way).

I’m not sharing this with you because I want the guilt complements that it’s all in my head– I really don’t want those.  It will make me feel mega uncomfortable.  I’m sharing this with you because we’ve all felt this way.  I like to put on a thick exterior and tell you that even if you want to look or perform differently, you are still worthy of your own self love.  But I’ve called myself a fat sow more times in the last three weeks than I will ever admit to again.  All because I let a moment of vulnerability create a backslide into skeleton ridden closet of body image issues.

My inner cave woman is SO disappointed.

But I already paid for my ticket, so here’s my plan:

In all seriousness, I’m going to go to the conference and I just know I’m going to LOVE IT.  I’m going to learn a ton, meet people that will inspire me, and hopefully inspire a few back.  And I’m going to do my best to choke my demons down.

We will always be judged by other people.  Our response is our choice.  So I’ve decided….

I am “Paleo Enough” for Paleo(fx).