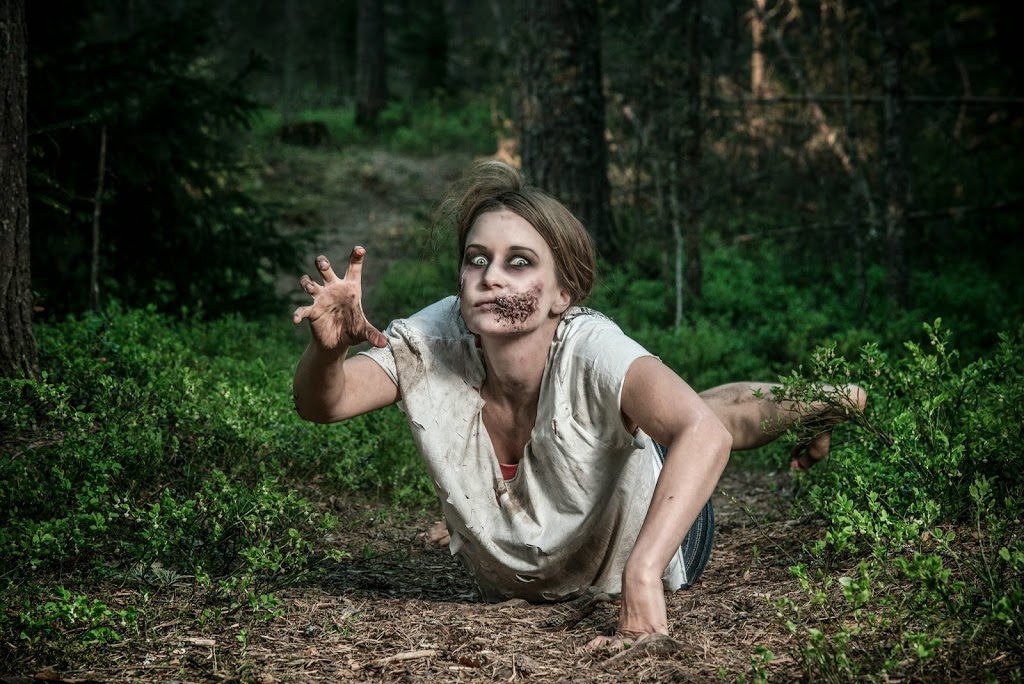 Warning- if you’re not caught up on the Walking Dead, there is a Season 5 Spoiler below.

It’s that time of year again.  The Walking Dead premiered last weekend, Halloween is right around the corner, and I have a hankering to watch Zombieland.

Things like this get me thinking.  Would I be able to survive the Zombie Apocalypse and maintain a real food, Paleo lifestyle?  In my head, the answer would obviously be yes.

…. if the Zombie Apocalypse happened tomorrow, how long would any of us survive?  The sad truth is that based on our own survival skills and knowledge of how to forage for our own food, most of us would not last long.

Let’s look at the most likely scenario:

The Zombie apocalypse takes over and suddenly the grocery stores and fast food chains are shut down.  Because from what I hear, Zombies are really inefficient workers.

So you turn to your pantry…. how much do you have that does not require a stove, running water, or a microwave to cook?  I would guess that most of us do not have much.  Maybe a few packets of tuna fish and some granola bars.

So after you’ve raided your neighbors houses and maybe even sacrificed the family pet, what next?  The next logical step would be to hunt and forage.  But do you know what to look for or how to set a snare?

Here’s the issue….  unless you are one of the lucky few to find Daryl Dixon or Tallahassee to cover your six, you probably won’t make it past the first thirty days.  Much less be perfectly Paleo.

And as a survivor, it would be to my advantage to be ok with that.  But I’m not about that.

Read this.  Think about it.  And may, just maybe, I’ll let you join my team when the undead come for us.

First and foremost, surviving in the post apocalyptic world is not the time to be concerned about that piece of bread going to your hips.  You’re going to cheat.  Get over it and move on (seriously, move quickly).

Do you get hangry if you don’t eat every 3 hours?  Could you fast for 12 hours and still be able to function?  If the thought of this blows your mind, you are probably not fat adapted.  Meaning that your body does not know how to use stored fat as fuel and relies primarily on consumed carbohydrates

This is pretty common in our modern, processed food infected society.  Becoming fat adapted can be achieved by following a low carb, high fat diet.  Luckily, you can start making this change today in preparation.

It would certainly be tragic to be found by a horde of walkers because your stomach is growling or you’re having a mega meltdown.

5 Paleo Approved Food Items to look for When Looting

I’m not going to tell you to walk by the Doritos’s display because there are made with GMO ingredients.  Indulge if you feel like you need to.  But remember- the amount you can carry and your time are both limited.  Don’t waste either.
You want to look for things that can be stored at room temperature, don’t need heating to prepare, and can be easily transported.

Forget the Twinkies.  Forget the massive cans of pudding.  Go for the stuff that will travel well and more importantly, give you sustained energy.

Learn to Hunt and Gather

Eventually, all the stores will have been looted or be too overrun with the undead to be worth the energy.  This is where your inner Bear Grylls will need to flourish.

Admittedly, this is an area where I’m super weak.  I know how to hunt Morels and I’m willing to eat dandelion leaves.
But I would say that foraging for plant foods will be a waste of energy.  Go for the big win- hunting wild game.
The meat and fat from most wild game will go much further in keeping you alive and thriving.  You’ll of course need to learn how to butcher and either dry the meat or make a fire to cook the meat.
Either way, I’m not the expert in any of this (although that’s become my new project).  But these skills will eventually mean the difference between life and death.

And then there’s Terminus….

Ok.  I know we were all grossed out by antics of the Terminus crew in the Walking Dead.  But the truth is, there is evidence that cannibalism was a fairly common practice early in our human history.  During periods of famine, the weak and useless where used to benefit the entire group.  If that’s not motivation to be a contributing member of your Zombie fighting tribe, I don’t know what is.
But seriously.  Have you ever been truly starving?  Or had your entire world constantly threatened?
I’m not saying I would indulge…  I’m just saying that you would want me on your team.
—————————————————————————————————-
So, what are you plans to stay perfectly Paleo when the dead rise?
Cheers!
-Kelsey